There’s a lot to update, of what’s been happening over these last few months.  In mid-March, I’d started writing a post – announcing the end of The [Salford] Wall.  It’s to do with money – both for the Wall and also myself.  Despite my best efforts (ongoing since November, including two grant applications, an approach to Heritage Lottery Fund, and making it to two job interviews), nothing has come through.  Along with fundamental uncertainty about the site and its timescales, I had no other option but to start bringing things to an end.

And then it all changed.  On 24 March, I met with Phil Mayall – development director at English Cities Fund, who own the land where the Wall is being rebuilt.  The meeting was about what’s happening on-site at present (I’m sharing it with the building material overflow from the construction of Vimto Gardens down the road), and more urgently how much time I have left.  We discussed the regeneration schedules, and what will be built where the bricks are now stored.

The [Salford] Wall now has the possibility of being a permanent monument on Chapel Street.  I also have 18-24 months to make it happen (rather than it needing to happen this summer, as I’d previously thought).

It’s taken a little while for it to sink in, as a myriad of other things in my personal life are being resolved.  Nevertheless, everything is clearer now.

Future updates may be sporadic, until I get everything stable. In the meantime, I’m honoured to be included in an exhibition opening Friday at the Grundy Art Gallery in Blackpool, Modern History Vol. 1 – of artists based in the North West reflecting on historical change and the global historical moment we’re in.

I’m creating a new 2-channel video work, which in a way scares me to death – as it will be the first time I present in a public forum the true contexts and reasons I am making this work.  Over the last three years, since I started the project, those reasons have – not changed, but become more complex.  It’s a narrative that began with rave and riots; with demolition, regeneration and late capitalism’s atomising and polarising force.  It’s a narrative by an outsider’s view.  But what I’ve learned and experienced in the three years since only seems to make it more true.

In the last months especially, it feels like things have improved since then – the victories at Barton Moss (if temporary), with Salford’s Jam Butty Camp in Prestatyn, the Ardwick and Ancoats Dispensary, the New Era Estate in London, Islington Mill’s Arts Council England capital grant – victories by the grassroots.  Things feel less in opposition, more about people working and coming together – resisting the imposed dictates of pure self-interest and taking a stand.  I need to remind myself that this is and always has been what the Wall is about.  And also that the wider conflicts are never just going to go away.  We can only do what we can.  But now that The [Salford] Wall is potentially going to be enduring, it gives me a reason to carry on; for me to say, beyond a shallow promise, that it will be rebuilt. 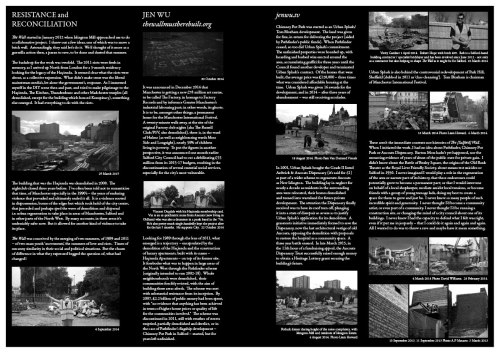 The Salford Wall is a project that relies on grassroots support in all forms.
To get involved, get in touch: